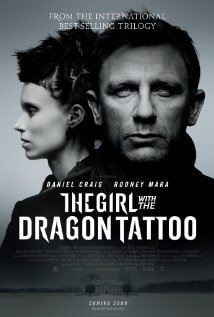 Noomi Rapace in the 2009 Swedish version portrayed more of the glowering sulkiness that one visualized for Lisbeth Salander than does Rooney Mara but otherwise this new American version of “The Girl with the Dragon Tattooo” is in it’s own way every bit as successful as the earlier Swedish adaptation of Larson’s book. Nor does this Hollywood remake pull any punches in the violent sex scenes which appropriately recall Larson’s original title, “Men who hate women”. However, good as Daniel Craig is, the difference between his more comfortable portrayal of Mikael Blomkvist and the less confident character created by Michael Nyqvist (2009), as well as slightly more plot detail, tilt the balance towards the the Swedish film. This film is not to be missed, though, if only for the wonderful graphics of the opening credits.