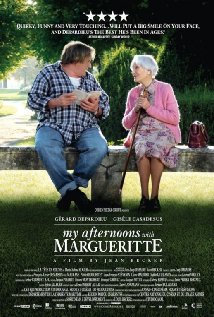 With Mona Achache’s recent The Hedgehog and now Jean Becker’s My Afternoons with Margueritte, French cinema seems to have a corner on unassuming but beautifully observed vignettes of human relations. At first glance My Afternoons with Margueritte can seem but a delightful amuse-bouche but peel away the surface and we find that the film is stuffed full of a number of social concerns, such as the nature of aging, friendship, parenting, childhood trauma, and self worth. Both Gérard Depardieu (as Germain Chazes) and the 95-year old Gisèle Casadesus (as Margueritte) are perfectly cast respectively as the bumbling, relatively illiterate village handyman, and the very literate, frail old spinster. Only the intrusion of Chazes’ implausibly younger and pretty girlfriend strikes a discordant note. Like the gentle kiss planted on the sleeping princess, Margueritte touches Germain’s soul and from that first tender meeting on a park bench we watch, during the course of this enchanting film, the flowering of belief in self worth and the awakening of a dormant intelligence within a thoroughly decent human being.