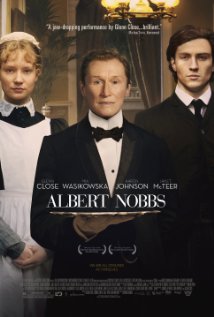 The center piece of this film is Genn Close as the loney, repressed, Alfred Nobbs who not only does not have a life of his own but does not realize that a life might be possible until he meets another woman forced to disguise her gender in order make a life for herself, Janet McTeer as Hubert Page.

The subject matter, the suppression of women in society and in the work place, the plight of orphans, the difficulty or raising out of the social miieu in which one is trapped, deserved a more engaging treatment. But Glenn Close, looking like an androgynous Charlie Chaplin, was so withdrawn into her sad character that it was difficult to identify with his attempts to escape his plight.

Ms. McTeer captured the screen with her expressive, soft, brown eyes, and injected the only spark of life into a film that was as repressed and bloodless as Alfred himself so that it was difficult to empathise with any of the characters. Even the context was muted – with sketchy charicatures of the mise en scene seeming as though rescued from a BBC Dickens production cutting room floor – and only came to life whenever Janet McTeer strode into view.